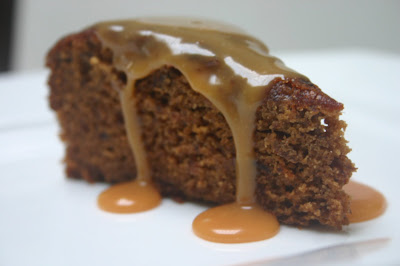 I hope you all managed to have a lovely Christmas and New Year. With this newsletter being the first of 2009, allow me to wish you all the very best for 2009.

This first newsletter for 2009 features a new cake. Sticky Toffee Pudding(picture above) comes on a 20cm base and is delicious served as dessert or with your tea. The toffee comes in a separate container so that you may warm the sauce prior to drizzling it over the cake.

Also, don’t forget the Fig & Almond cake which comes in a 26cm base and will serve over 16 portions. This cake is also dotted with dark chocolate. View my list of cakes for prices and sizes!

In the colourful jargon used in cooking, 'zeppelins in a fog' are sausages and mashed potatoes.

The fuzzy melon, also called fuzzy squash, hairy melon and moqua, is a winter melon that is 6 to 10 inches long with green skin and fine hair-like fuzz that disappears when the fruit matures. The shape varies from cylindrical to dumbbell-like. It's mild subtle flavor is described as somewhat like a cucumber or summer squash. They are originally from southern China and have been cultivated there since antiquity.

Louis XIV, known as the Sun King was reported by his sister-in-law to having eaten at one meal: "four plates of different soups, an entire pheasant, a partridge, a large plateful of salad, mutton cut up in pieces with garlic, two good pieces of ham, a plateful of cakes, and fruits and jams."


Recipes
More of my recipes will be published this month in the Best Buy Supplement out monthly with the Times on Wednesday! Next issue will be out on February 11th

The E&D Magazine will also be out in March as well as the brand new STYLE On Sunday Magazine.