Halloween is celebrated on the last days in October and is a feast to celebrate the dead; or rather the souls that are stuck between the mortal world and the dead.  Being an ancient Celtic celebration in origin, Halloween was also celebrated to commemorate the new harvest.  A bountiful time before the harsh winter begins.  The festival itself has changed over time and the way we celebrate it now-a-days is more linked to the souls moving on other than the harvest.
The term Halloween is said to come from all Hallows' Eve which is the evening before All Hallows' Day, or All Souls' Day.  The fireworks displays as well as the bonfires that were originally done on this feast were meant to ward off any evil spirits that might have crossed over into our world.  The loud noises coupled with the flashes of light were supposed to scare the ghosts away. 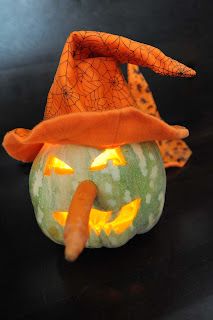 Halloween or different versions of the same feast are celebrated throughout the world.  In Latin America and Asia they coincide with local 'day of the dead' festivities. In England, Guy Fawkes day and bonfire fire were originally celebrated at this time of year but with the influence of American pop culture the feast is now also called Halloween. In America, children dress up as ghosts, witches, vampires or even zombies on Halloween night and go from door to door crying 'trick or treat'! If they are given sweets from the houses they visit, then the tenants are spared a trick.
One of the most prominent decoration or symbol of Halloween is the pumpkin.  Pumpkins with smiley or scary faces, lit with a candle from inside are known as jack-o'-lanterns.   Pumpkins were introduced into the Halloween tradition because they are quite abundant at this time of year!
Carving your pumpkin can be quite easy but I suggest that you stick to basic designs to start with.  In America, Pumpkin designs have become quite intricate and you can get your pumpkin carved professionally in any pattern your wish.  Apart from the basic horror faces, you can see pumpkins depicting celebrities, politicians or cartoon characters.
Pumpkins are best carved a day before you want to use them or on the day.  If you carve your pumpkin too early, it will lose its shape.  Pumpkins start to dry our once they are carved, so it is best to either coat the carved pumpkin with some Vaseline or petroleum jelly or else to keep it soaked in water when you are not using it.  If the pumpkin dries out, it will start to shrivel and will not be as attractive to display.
Roasted pumpkin seeds
You may wish to use the pumpkin seeds that have been reserved whilst carving the pumpkin. Firstly you will need to clean the seeds and discard any pieces of flesh that stick on.  Pat the seeds dry and place them in an oven tray making sure to spread them out evenly so that there is only  1 later of seeds. Sprinkle the seeds with some rock salt and bake in a pre-heated oven at 150C for about 45mins.
Once the seeds are cooked and cooled, peel the outer layer and enjoy the seeds inside.
Fried egg blood-shot eyes. 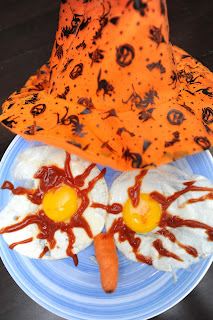 To make the evening a little bit spookier, try this twist on some simple fried eggs.  Fry the eggs into a soft-yolk consistency. Once the eggs have cooked, squirt the ketchup on the cooked egg white as if to have blood-shot eyes!
This can be a fun way to get your children eating eggs!